Venice is one of the most famous cities on the shores of the Mediterranean, if not the best known. Well known for its canals, it is built on a group of over 100 islands that are linked by over 400 bridges. It was a major financial and maritime power during the Middle Ages and the Renaissance period, as well as an important center of commerce for goods such as spices, silk and grain.

This is the second game in the Eurocity Trilogy by Braincrack Games, following Ragusa. It is a pick up and deliver game designed by Andrei Novac (known for Praetor and Versailles) and Dávid Turczi (Anachrony, Tekhenu, Tawantinsuyu) that has the players take the roles of merchants riding across the canals of the city. Your job is to deliver goods to various buildings using your gondolas in order to become one of the most influential merchants there is!

How to play Venice

Before going further, I suggest you take a look at my Venice unboxing article. It will help you get familiar with the components and what each one is used for.

Your objective is to fulfill missions by delivering goods to buildings on the board. These missions will award you with Victory Points (VPs), coins and special benefits. You have a single gondolier and two gondolas, so you will have to alternate between them each turn. Keeping your gondolier on the same gondola for two turns in a row will cost you 3 coins. Money does not come easy in this game (at least not in the beginning), so mind your choices well.

Moving on the board will cost you money (the price is printed on each canal), so you will have to manage your paths around the city carefully in order not to get bankrupt. Don’t worry though, the first movement on your turn is always free. This means you will never get stuck because you don’t have enough money to travel. You also have the possibility to build bridges over canals to travel free under them. This is recommended, as every time you pass under your bridge you gain one coin instead of paying money. Also, whenever an opponent passes under your bridge, they gain one intrigue.

Whenever you stop at a building, you place one of these on that building’s track or train your assistant that’s already on that building. These allow you to gain resources, trade, make money, and much more, depending on the buildings you assigned them to. When passing by a building that has your assistant on it, you may activate its ability(ies) to gain resources and other bonuses.

However, space is limited on Venice’s canals and gossip spreads fast. Whenever you pass by another merchant’s boat, a meeting takes place and the suspicion of the Inquisition will raise. Both you and the other player will have to decide whether to increase your intrigue or spend one scroll to keep it at the same level. Being a well-known merchant can benefit you in the long run, but you will have to pay attention not to raise too much suspicion or you’ll end up losing the game.

Venice’s solo mode is a beast. You play against the Doge, the head of the state. He is a corrupt person and can cheat very easy, since the Inquisition never investigates his actions. This means that at the end of the game, you are the only one at risk of arrest.

The Doge has a band of smugglers under his control that will do the bad stuff for him. Over the course of 9 rounds, these guys deliver goods for the Doge based on cards drawn from two Smuggler decks. These cards decide where each smuggler will deliver his goods and what Doge card(s) you will have to solve after their turns. These Doge cards affect either you, the Doge or both.

The smugglers ignore the building effects. In exchange, they earn VPs for the Doge based on their assistant’s position on the location they arrived to. This means that the Doge constantly gains VPs and can get ahead pretty fast if you don’t keep up with him.

I found this solo mode much more challenging than Ragusa’s, where you play against the Patrician. This mode feels like a constant race against the Doge for VPs. I never lost, but in my first solo game was very close to (won at 5 points difference). You don’t have much time (only 9 rounds), so you must optimize your movement as much as you can.

In the beginning, the game will feel slow because you start with not many coins and movement is costly. You will keep doing only 2-3 moves on your turn (free one + 1 or 2 more, depending on the prices) and you will feel like you are not achieving much with your actions. However, this problem is diminished after about half of the game, as you will start earning coins easier by setting up building combos and activating multiple abilities at once while traveling. By the end of the game, you will be traveling 4-5 spaces at a time, earning lots of bonuses from your assistants.

Pay attention to how buildings are placed on the board. Sometimes, a couple of great buildings will chain up and allow you to gain a lot of things when passing by. If you train your assistants well, you can lower your intrigue by a lot on your turn or gain many scrolls/coins that will be very useful.

Building bridges can be a smart way to punish your opponents by forcing them to gain intrigue whenever they pass under your bridge. Probably the most annoying thing you can do is block the 3 buildings on the north side of the board using your bridges. This will annoy your opponents a lot if they use those buildings as part of their combos, because they will gain 1-2 intrigue every time they go up there. At the same time, you should avoid passing under many bridges, as you’ll gain a lot of intrigue and that can be really bad for you.

Around the end of the game, you will have to try and get your intrigue down as much as possible, because you don’t want to be arrested. You can do that in many ways, such as activating building abilities, using scrolls or paying coins (when game ends). The player elimination can be tough here, but luckily you can all avoid that if all players end with 0 intrigue.

My thoughts on Venice

As I stated earlier, Venice might feel slow in the beginning and the first couple of games may take a while. Our first game was at 3 players and it took us 2.5 hours to play, with learning and teaching the rules included. That felt like a lot, but the next game took us only 1.5 hours, so time to play gets lower after a couple of plays. I expect it to get down to around 1 hour about 4-5 plays. Our first game was filled with short travels meant to train our assistants and that dragged the game a lot. However, in our second game, we already knew that we need to focus more on money and we integrated them into our engine earlier than before, which shorted the playtime by a lot.

At base, Venice is a pick-up and deliver game with some engine-building aspects in it. When I talk about engine building, I refer to the building combos that you can set up. And I love that! I’ve had lots of fun working on my building chains to make deliveries faster and get access to various abilities. There are many ways to build up your combos, and that’s also great.

The fact that the missions are actually multi-use cards is really neat. After fulfilling a mission, you place it under your player board and gain access to a special ability for your future turns. Just as with the building combos, getting some good abilities can help you a lot during the game. Pay a lot of attention to the mission cards when choosing which ones you’ll keep!

The player elimination rule can be punishing, but I like the fact that you can all avoid it by getting your intrigue down to 0. We actually managed to do that in our first game. We had the Minor Council, the Church, and the Library close to each other and we trained our assistants to get to the top in each of them. This way we could lose up to 6 intrigue in one turn by passing by them!

The game felt a bit fiddly because the board gets pretty cramped at high player counts. At 3 players, meetings took place quite often and it was hard to place 3 gondolas next to each other on the board without knocking stuff down. I think the docks could’ve been a little bigger (maybe big enough to fit at least 2 boats without any problems). Also, placing the assistants on the buildings might be problematic because you won’t be able to see the abilities offered by it. However, you can solve that easily by placing the assistants next to the building instead.

I consider Venice to be a game that benefits a lot from multiple plays. Once all the players know how tight money is in the beginning, they will be more incentivized to build an engine that generates coins fast and allows you to travel more. I’d say that you should be patient with this game and not give up on it after the first try because it took longer than expected. It may seem like a complex game at first, but soon you’ll find out that the rules are easy to understand and the complexity is given by the decisions you have to take. I found it to be a great experience for my first pick up and deliver game and it will hit the table again for sure!

Full disclosure: A copy of Venice was provided by the game publisher. 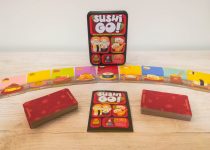 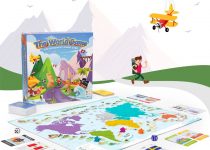