It is already known that I’m a fan of train games, so Small Railroad Empires was clearly on my list to try. It may not be your classic auction-based train game like Irish Gauge, but it proved to be a nice challenge at higher player counts. There is a lot of tension and it feels like a constant race to be the first one to deliver goods to a city and complete achievements.

Small Railroad Empires is part of the Small Empires series designed by Milan Tasevski, a Macedonian designer who founded his own board game studio, Archona Games, along with two other passionate board gamers, with the hope of spreading the culture of board games to their country. I think they did a really good job by designing and publishing this series, since they are easy to teach and play with people that are new to this hobby.

How to play Small Railroad Empires

In Small Railroad Empires, the players compete to pick up resources from various factories on the map and deliver them to cities to earn money and points. On their turn, players will lay down tracks to form routes, navigating the board carefully and efficiently, since they’ll have to pay for each track based on the terrain underneath it.

Players have a limited number of tracks, trains and disc markers which they can use for various actions. Every turn, the active player will place two track on the board, trying to connect cities and factories. They can decide to deliver goods from a factory to a city and get rewarded with money and Prestige points for this. When delivering goods, the player has to play a train card from hand and they will be awarded an extra Prestige point if they meet the delivery criteria on the card. They can also place a third track on their turn if they pay a price for it.

Each player has a secret objective which will award him points if completed. These objectives require you to deliver goods from a certain factory to any city that requires those type of goods. Players will also compete to complete various achievements that will award them Prestige points. An achievement can be completed by multiple players, but only the first player to complete it will earn 2 Prestige points, while the others will only earn one point.

At the end of your turn, you can buy new train cards if you have less than the hand limit of three. Players will keep taking turns until one of the end game events triggers. At that point, players count Prestige points from the Achievements cards, passenger connections and end-game scoring. As in most games, the player with the most Prestige wins.

From the first minutes of playing you will notice that money is really tight. You have to be very careful when spending the little money that you have. You don’t have much money to start with and getting money is not that easy either. Best way to get rich is to aim for delivering goods on long distances and to cities that no one else delivered to, so you get the money bonus. This allows for some really interesting player conflicts, though. For example, if you notice someone going for a city but they have a low budget, you can block their way to force them to pay you money to pass through the same tile or take a different route, which may be more expensive for them.

I really liked the achievements. They add a racing component to the game that change the dynamics and require a different strategy from game-to-game. They also help you plan your actions to gain prestige points. At two players it is pretty easy to run for all achievements and meet their criteria, but when playing at 3 or 4 players it becomes a real challenge.

Small Railroad Empires is easy to pick up and plays fast, taking around 30 minutes at 2-3 players and around 45 at 4 players. Although it is a light game rule-wise, there’s some strategy to be considered when playing. The tight money and crowded board, along with the race for achievements and bonus money for being the first one to deliver to a city make it really tense sometimes.

The game plays well at all player counts. It’s a pretty chill game at two players, there’s barely any tension, since terrain tiles can hold up to two tracks, so both of you can go anywhere on the map, even if you cross each other’s path. The tension grows at higher player counts, and the game feels really tight at 4 players. The solo mode uses two decks to control your opponent’s actions and it’s a good way to train when you got no one to play with.

The base game comes with some extra variants which add some small changes to the game that are good to add some variety. I also got Scenario Pack 1, which comes with 4 maps to play on. I tried Germany and Europe and I enjoyed playing on both of them, because the terrain depicts the real geography of the country and the continent, which makes the game more thematic. Looking forward to play on the UK and the US maps too. Also very curious about Scenario Pack 2, which adds maps for Australia, Canada, France and Italy.

Small Railroad Empires is a light pick up and deliver game that has good strategic depth. This train themed game feels really tense at high player counts because the board gets crowded really fast and this leads to a lot of player interaction. The game variants and scenarios provide good replayability which guarantees that the game will not feel repetitive too soon.

The game is also currently on Kickstarter, with less than 48 hours left. They released a new expansion called Freight on Board, which adds the ability to export cargo containers via ships in port! Sounds like a really good addition to the game, since there will be more ways to gain Prestige and money.

Full disclosure: A copy of Small Railroad Empires was provided by the game publisher. 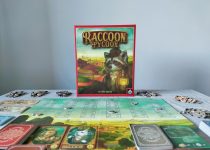 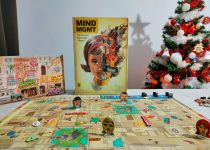 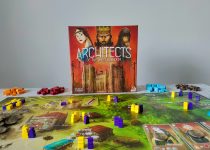