Mind MGMT is a hidden movement game that raised paranoia in my group. It’s the first game of this genre that we try, and it got us addicted after only a couple plays of the training mode. The full experience is even better, as it sowed a lot of mistrust between us during the game. The designers have a history of working together on great games, and this one just couldn’t be better. The mechanics blend perfectly with the theme, which goes hand in hand with Matt Kindt’s art style.

Playing mind games with your opponents

Based on Matt Kindt’s comic book series Mind MGMT, everything in this game is covered with visually appealing graphics and enigmatic text. For those unfamiliar, it’s essentially a world of stylized thugs, secret message carrying dolphins, and a constant sense of paranoia. Being a hidden movement game, one player controls the recruiter and runs around the on the board, trying to survive while carrying out his mission, while the other players control four special agents attempting to hunt him down.

The recruiter and the agents take turns in the game, with the agents moving two of their four bandits each time they take a turn. The recruiter’s turn will be to take a secret step on the map (or shift two steps). Each time the recruiter walks over one of the three secret features that he possesses, he acquires one recruit. Once every two turns they will also have to tell how many recruits they acquired in the previous two rounds.

The agents might use a variety of techniques to narrow down the recruiter’s position. They might inquire as to whether the recruiter has visited any locations with a certain feature. If they succeed in their request and the recruiter leaves a step token to identify their previous location, they can expose it later to learn which turn the recruiter visited that place. Finally, they can attempt to capture the recruiter in their present location, which can result in an immediate victory. The recruiter wins if they reach 12 recruits or survive until turn 16.

The campaign mechanism is another important aspect of Mind MGMT. Each side of the game includes seven little packages that they may open to add more gaming elements or rules to assist them out. The premise is that participants stick with the same side throughout the game, and if they lose, they get to open a new package.

I appreciate how there are so many different ways to play Mind MGMT. The game has a tutorial mode, which is a full, fun game on its own and a fantastic way to learn the main concepts, and then the ‘full’ game adds a few extra twists and turns. Then each package introduces a new twist, and it’s up to the players to decide whether they want a huge, messy game with numerous packages per side or a more straightforward game with only one or two upgrades per side.

Despite playing so differently, the two sides appear to be quite balanced – we’ve had an about 50/50 victory record between the two players, and each game has been very tight and tense. We’ve had a couple of games where luck was a deciding factor, such as discovering the recruiter with a blind guess, but overall most games required really important decisions from both sides.

The deeper you get into the gameplay, the more complex it feels. I believe that the game designers saw that this might become a very deep, complex game, therefore they very wisely incorporated the training mode, and I agree with them that you should play the training mode first for at least 3 or 4 times before getting into the complete experience. The game becomes more difficult when you add immortals, mayhem tokens, and a few additional actions (shakedown and unique player powers).

There isn’t much luck involved in Mind MGMT, at all. You can ask the recruiter whether they have been on a spot with a feature in the past, and even if they reply no, there are many places on the board you could eliminate. Many recruiters strive to visit as many features as possible early on in order to avoid having to provide too much information that leads to their tracks. Most of the time, the recruiter in our games chose to start somewhere in the middle of the board so that they have a large number of movement options.

Mind MGMT is without a doubt the finest game of its type I’ve ever played, a deeply themed experience not only in terms of aesthetics but also in terms of the atmosphere evoked by the gameplay. I’d strongly advise anyone interested in trying a hidden movement game or those who like this genre to give this game a try. I promise you’ll have a really good time!

Publisher: Off the Page Games

Full disclosure: A copy of Mind MGMT: The Psychic Espionage “Game.” was provided by the game publisher. 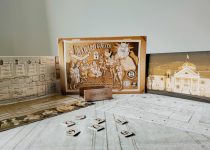