Skip to content
Home
Board Game
Venice – What’s Inside #1

Earlier this week I received my copy of Venice from Braincrack Games. Of course, as soon as the courier handed it to me, I went straight to my desk and opened it to check the components. I just can not resist not opening games when I receive them, even if it takes some time until I manage to play it.

The box cover captures the city of Venice at sunset, illustrating a gondolier paddling in his gondola that’s full of goods. This represents the theme of the game very well and gets you immersed in it from the beginning. The box follows the same design as Ragusa, just as you’d expect for a game that’s part of a trilogy.

When opening the box, the first thing you’ll see is the rulebook and a punch board. The latter contains coins and building tiles, along with other special tokens. These are printed on sturdy cardboard and I managed to punch them without ripping their surface (yay!). The rulebook is 20 pages long and contains a lot of illustrations and examples to help you out. I like that, as it makes it easier to go through the rules. I found the paragraphs to be well-written and easy to read. Therefore, going through them won’t feel like a chore when learning how to play. I like how the back of the rulebook works as a reference for the actions of the buildings. It will prove helpful for sure.

I took the main board out and opened it to place it on my desk. The board depicts the canals of Venice with buildings on their sides. I was happy to see that the board is double-sided, having a night version of the map on the back. For now, it seems to be just an aesthetic change, as I didn’t find any other difference. The placement of the building spots is the same and the canals seem to be routed and priced the same way.

Moving forward, after taking the rulebook and the board out of the box, you’ll find all the other components. These are well organized in plastic bags and smaller cardboard boxes (photo above), just like the ones in Ragusa. I love the way Braincrack Games approaches storing components by using these boxes, as it helps a lot with the setup. Really wish more publishers did this.

After a brief examination, there doesn’t seem to be any problem with any of the components. The only exception is a gondola with a broken mast (as seen in the photo above). The gondolas are made of plastic and the mast themselves are very thin, so if the components are cramped, I’d expect this to happen. I’m alright with this, since it doesn’t affect the gameplay at all. If someone asks what happened to that gondola, I’ll say that the gondolier was drunk one night and hit a bridge. This will add a bit of lore to the game.

One thing I appreciate a lot is that the components have a small icon depicting the rulebook and the page in it where you can find information about them (see photo below). This is valid for the cards, the player boards and the buildings already printed on the board. I find this very helpful, because if it ever happens that you forget how something works, you can just look at that icon and then go straight to the corresponding rulebook page, without having to browse through the book too much. Very much appreciated!

I am happy with the overall quality of the components in Venice. The main board and the player boards are also printed on good cardboard, so they don’t feel cheap like in other games (looking at you, Terraforming Mars). The meeples (assistants, bridges, gondoliers) are solid, none of them were chipped or cut wrong.

One thing that I would complain about is the choice for the coins valued 1 and 5. They are both silver colored, the difference in size is not that big, so they can be confused pretty easy. Will have to see if this affects gameplay.

There are clearly lots of components in this box (as seen above). However, keeping in mind what each one is used for should not be that hard. Let me talk you through them, giving you some information on what each one does:

You’ll get used to what everything does after going through the rulebook once, as everything makes sense in the end.

After taking everything out of the box I did not seem to have any problem putting them back. Everything fits well in the little player boxes. Initially, all the gondolas were in the same plastic bag and that may be a reason why one of them broke. I separated them now, each one inside its player box, so now they have more space available. I hope no gondola will break again in the future.

That’s it for now. Looking forward to my first match of Venice! 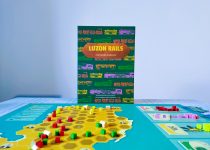 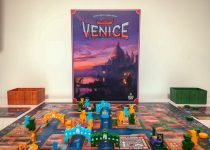 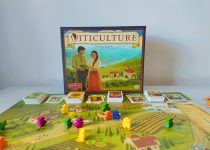