Mandala Stones was very popular in my country when it got released back in March. We were lucky to have it localized and it got released here in Romania one week earlier than the international release. Many friends of mine bought it at that time and I’ve only heard got things about it. After the game got released internationally, I was lucky to be picked as a reviewer for it.

It is a colorful abstract game that has players collect mandala stones and score them based on special rules. The game plays fast and is really fun, especially at 2 players. My group liked it a lot and it fits well in my collection along with other abstract games such as Calico and Overboss: A Boss Monster Adventure.

How to play Mandala Stones

In Mandala Stones, players take turns either picking stones from the main board, or scoring the stone towers already present on their player board. There are special rules for each action and I will elaborate more on them below. Being an abstract game, there are not many rules, but it’s really important how you alternate your actions in order to maximize your points.

As you may have noticed in the photos, each stone has a symbol on it, and there are two possible symbols. The four artists also have one of these symbols on top of them. When picking stones, you pick an artist and place it on an empty spot on the main board. You then pick the stones around it that have the same symbol as the artist and that are not adjacent to another artist.

The picked stones are then placed on an empty scoring spot on your player board, forming a tower. Each of these spots has a special scoring rule. When scoring on your turn, you pick a color and then pick the top stones of that color from 2 or more towers, applying the special scoring rules for each stone picked. If you do not have at least 2 stones of the same color on top of your towers, you can decide to score stones of different colors, but you will receive only 1 point for each of these.

The scored stones are removed from your board and placed on the mandala spiral board. Sometimes, one of your stones may cover a spot with either +1 or +2 written on it. These spots award you bonus points and you should really pay attention to these spots, as free points are always good. The game ends when you reach a spot that contains a number of hands equal to the number of players.

My thoughts on Mandala Stones

I’ve tried this game at all player counts and I must say it is very different based on how many players there are. At 2 players, there is some planning involved. Your turn comes often and you can always plan your next action, as the main board won’t change much until your turn comes again. This allows you to come up with short-term strategies and optimize your actions to earn as many points as you can when scoring.

However, at 3 and 4 players, the game changes a lot. More stones are removed from the main board until your turn comes again and most of the time the stones that you wanted are already gone. You can not really plan your actions in advance (at least not when picking stones) and you’ll have to go with what you have available on your turn and find the best option at that time.

A lot of people compare this game to Azul, so I guess I should join this trend too. I must say, I am not a big fan of Azul. The game felt pretty bland to me, very predictable and I decided it’s just not for me. And this applied to everyone in my group, as neither of us really liked it. However, I do understand why some people may like it. On the other hand, Mandala Stones clicked with us immediately. There’s more variability in scoring and overall the player interaction felt better than in Azul.

Overall, the components are of great quality. The stones are sturdy and the symbols are printed well on them, with no wrong alignments. The main board and the mandala board are both made of thick cardboard, but the player board are not. They are made of very thin plastic and are pretty bendy. I do not have a problem with that, since they’ll only sit on the table and you don’t flip them or do anything else with them, but there were some players in my group who complained about that. Also, they are printed on just one side, and it feels like they missed an opportunity by doing so. They could’ve used the backside for a more advanced version of the game, with different scoring rules for the towers.

When picking stones you want to look for the best spot available for you, while also trying to mess with other spots that you may find useful for your opponents. I often place my artist somewhere where I can also block a stone that my opponent may need for his plan, while also getting the stones that I am looking for. I shortly found out that it is also very important to focus on your towers having stones in the same color order, if possible. If you manage to do so, you can chain multiple scoring turns in a row and get many points in a short period of time.

This should be your aim during the entire game, but it is especially important during the late game. If you build your towers well, you could force the game to end by scoring multiple times in a row while your opponents are still picking stones and you’ll end up being ahead of them in score by a great amount!

There’s clearly a lot of replayability in this game as the setup is always different because initially the stones are randomly placed on the main board. The objectives add some variability to the game, as you will be looking to achieve different goals in every game based on what objectives you received. For a game that plays this fast, having high replayability helps a lot.

Mandala Stones is a beautiful, fun abstract game that I thoroughly enjoyed and will stay in my collection indefinitely! It’s got simple rules but it’s still a pretty challenging puzzle when put on the table. It is greatly replayable due to the randomized setup and you have to optimize your actions in order to get the most points out of the mandala stones that you pick and score. If you’re a fan of abstract games like Azul or Sagrada, you should try it out for sure, I believe you’ll really like it!

Full disclosure: A copy of Mandala Stones was provided by the game publisher. 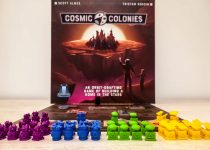 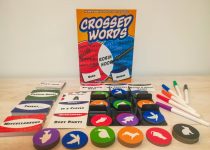