One year ago I used to watch Wil Wheaton’s Tabletop series on YouTube after I got home from work and I stumbled upon his episode on Sushi Go! and Roll For It. I instantly fell in love with how cute the artwork for Sushi Go! is and how fun it seemed to be. Right after I finished watching the episode I put the game on my list of games I wanted to play.

Earlier this year, Sushi Go! joined my collection and it confirmed my expectations: Phil Walker-Harding did an amazing job at taking the essence of card drafting games and turning it into this light card game that is the perfect gateway game to introduce your friends to card drafting and set collection!

How to play Sushi Go!

The game relies solely on its deck of cards, made up of 108 cards that are split between 8 different dishes. Each food type has a different way to score points – some cards will earn you a fixed number of points by themselves, others will need to be paired up in order to earn you points, while some will need you to own most cards of that type in order to earn the points.

The game is played over the course of 3 rounds. The setup for each round is simple and straight forward – all the cards are shuffled and each players is dealt a number of cards based on the amount of players at the table. The remaining cards are put aside and then the game begins. Each turn, players simultaneously select one card from their hand to play and then pass the remaining cards to the player on the left. The chosen cards are then revealed and the game continues.

At the end of a round, players calculate their scores and return all the cards to the main deck, except for the Pudding cards, which are scored at the end of the game. After the 3rd round ends and all scores are calculated, the player with the most points accumulated is the winner.

My thoughts on Sushi Go!

This game was a birthday gift from my girlfriend and I was very happy when I opened the present box and I saw Sushi Go! inside it. We used to play it on Board Game Arena between rounds of Takenoko and we both enjoyed how simple and fast it is! I couldn’t be happier when I saw it in my hands, knowing that we can now play it in real life, with our friends and with actual cards!

As the box says, the entire game gets down to “pick and pass”, making it a very accessible game to teach. All you need to explain is how scoring works for each card type and then you can jump straight into it. The cards have the scoring rules written on them in case anyone forgets how any card is being scored and I find that very helpful when I’m playing with a new group, as new players do not have to worry about keeping too many rules in mind.

I’m having lots of fun playing Sushi Go! because although the cards in your hand are hidden from the others, you can still see what cards everyone picked before and you can try to guess what they will be going for next. There’s one person in my group who always goes for Sashimi and we already know that when we have Sashimi in our hands, she will for sure go for it if we don’t take it. However, even if we know that, we often ignore it and we pass the cards forward, thinking that someone else will take it before she does, yet she always ends up with one set of Sashimi cards. We should stop doing that, as she sometimes manages to collect two sets of Sashimi and we are getting smashed!

For how simple it is, Sushi Go! will sometimes force you to take tough decisions that will impact other players as well. Like I said earlier, you will often find yourself looking at other players’ cards, thinking about your next pick. Your opponent has 2 Sashimi cards and you currently have one in your hand. What do you do? Keep the card for yourself and get 0 points for it this turn, but you stop your opponent from getting 10 points?  Or do you keep a different card that will earn you some points, but your opponent also earns 10 points by picking the Sashimi card next turn? Tough decisions like this one make for some hard times, which are actually enjoyable because they bring some action to otherwise a fast and light game.

To end here, I think Sushi Go! does perfectly what it was designed to do, and that is being an accessible card drafting game that will appeal to everyone, kids or adults, gamers or non-gamers alike. If you are looking for a fun card game that plays fast and has simple rules, Sushi Go! is the way to go! Even if you’re a fan of heavier, more complex games, it can be a great filler between other games. 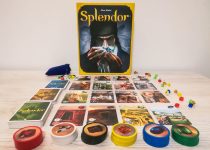 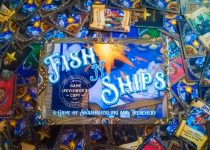 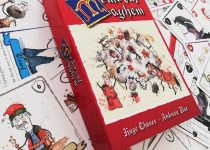