This game uses the same mechanics and system from the original series but with a different theme, adding a new twist to the game. This game includes 4 scenarios that you can play solo or cooperatively with your friends. It uses scan & play as the main technology behind it, allowing for many crime stories to be investigated using the same components. All you need is a copy of the game and the mobile app and you can play it!

On the box front you can see Victor Lavel, holding a sheet of paper in his hand that looks like a map of the city, probably looking for the next location to go to and look for clues. Behind him, there is a street that’s full of people dressed representatively for the early 20th century. I like this art style and their scenery choice, as it puts you in a certain time period (the beginning of the 20th century) and in a certain location (Paris) even before you open the box.

Inside the box, you will find the Evidence Board that you will use as your personal notebook to place down clues and other cards related to the case that you are solving. The backside is designed to look like a leather-wrapped notebook, which helps you dive more into the atmosphere at the beginning of the 20th century. This board has two differently colored areas that will hold different evidence cards, based on how much information you know about them.

Inside the insert, you will find various components, such as location boards and multiple card decks: characters, special items, evidence and puzzle cards. All of these have their own slot in the insert and fit perfectly inside it. They can also be taken out of it without much struggle. The insert has a transparent lid that keeps these decks together very well. I found this very helpful, as I decided to store this game vertically on my shelf, and this way I’ll make sure that I won’t have to sort them after taking the game off the shelf. Very happy to see that more publishers started adding lids to their inserts, after having the same surprise with Overboss: A Boss Monster Adventure.

The location boards depict different sceneries and places that can be found in Paris. These boards can be scanned using the app to move between locations. When moving to a new location, you can explore them in the app by swiping around. Evidence cards can be found while searching the scene at a location. Special items go directly on the Evidence Board when revealed and can be used as clues for the case you are solving. On the other hand, the puzzle cards will help you solve various puzzles that are part of the scenario that you are playing. The app will always instruct you on what to do with each card after revealing it. 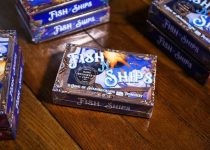 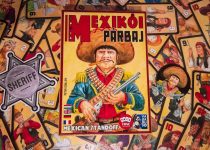