After sitting on my shelf of shame for a bit over 2 months, I finally managed to bring Aeon’s End: Outcasts to the table during the holidays. I instantly regretted not doing so muuuuch much earlier because this game is simply astonishing!

To my shame, I’ve never played Aeon’s End before. I only heard about it last year, after watching Tom Vasel’s review of Aeon’s End: Legacy. Although it didn’t impress him, it convinced me to do some research and I ended up actually quite captivated by the design.

Aeon’s End is a cooperative deck builder that has players take roles of mages in a fantastic universe. They defend the Gravehold from evil enemies called Nemeses that are trying to eradicate humans and take control of the world. Each player has a starting hand and a starting deck of cards designed for his character which he can improve over time by buying new cards from the market using Aether. Each turn, you play cards from your hand to gain Aether and purchase new ones or buy charges for your special ability, prepare spells or attack the Nemesis and its minions.

However, there’s a twist to the traditional deck building system, and it left me speechless when I first heard about it: you almost never shuffle your deck (unless instructed to), which allows you to plan your future actions in advance. The turn orders are randomized each round by a turn order deck and the game ends when either all players, the Gravehold or the Nemesis lose all their life points.

Aeon’s End: Outcasts is a standalone game in the series that can also be used as an expansion for the base game or other games in the series. It comes with a set of four Nemeses that you will fight while following the story line and with a new mode: Outcast. An old friend of your characters returns and asks you to join him on an expedition through the Void, protecting him and feeding him charges so he can aid you with his powerful spells.

The Outcast replaces the Gravehold and you have to protect him just like you would protect the Gravehold in a normal game. After giving him 8 charges, he activates the ability on top of his deck and helps you a lot in facing the Nemesis and his minions. His spells are very strong and his other abilities can be real game turners if timed right. Many of these will give you a choice between two effects, so you’ll often have a better option if the first one does not help you much, based on your current state of the game.

The large amount of rules and mechanics that you must remember may seem overwhelming at first, but you will get used to everything pretty fast. It took us 2 hours to go through the entire rulebook while setting up the game and trying to understand what everything does, and then we still faced some problems during the first battle.

We had to check the rulebook a couple times to make sure that we’re getting everything right, but after the first fight we had a good grasp of the rules and everything went perfectly fine after. So don’t be afraid when you first dive into it, as it gets easier and easier to understand while playing and it will all make sense in the end.

My thoughts on Aeon’s End: Outcasts

Now that I shortly described you the game and what new stuff Outcasts comes with, let’s talk about how I felt playing this game. I will try to keep the amount of spoilers as low as possible, as the game is story-driven and you unlock various stuff as the story unfolds.

Each Nemesis has its own unique mechanics that will always get your gears moving to find a strategy to beat it. Some of them have really strong abilities that you certainly need to avoid activating while others totally change the way the game plays (more details coming next) and some will rely on an army of minions to crush you and your friends. No Nemesis is like the others (at least in Outcasts) and you will constantly have to adapt your deck to the current Nemesis.

The second Nemesis really impressed me. I liked how it influences the market and that there are two ways to actually beat it. Because the market is deeply affected by the way this Nemesis works, you have to constantly pay attention to the available cards and to adapt your deck as you play, because this Nemesis almost nullifies the possibility of building a deck in your mind and then just trying to buy all the necessary cards as the game goes.

There is a possibility that you will almost never see some cards when playing against this Nemesis, so if your main deck idea revolves around a certain combo, then maybe you will have a hard time beating him. But we loved this, as our decks constantly evolved and we took advantage of the Outcast to actually beat him.

The market is constantly evolving as the story advances. You will unlock new spells, gems and runes after every successful battle but you will always have to keep it down to a total of nine different cards in the market. We loved this because after unlocking the next Nemesis and reading its rules, we always tried to find the best set of nine cards that will help us the most when facing that Nemesis. Some cards never left the market since the beginning, while others seemed interesting at first but proved to be less helpful than we thought.

What we enjoyed the most was finding powerful combos that will help us defeat the Nemesis. I played as Ilya and I tried to exploit her special ability as much as possible. It allows her to use her prepped spells at any time without discarding them, meaning that you can use them twice on the same turn if your ability is charged up. So I often worked on opening my third and fourth breaches early (they deal +1 damage if opened) so I could become a glass cannon by the end of the game. I managed to find a combo that allowed me to deal 30+ damage in just one turn using my ability, and that made me feel like a small god of some sorts, as a Nemesis usually has 50-80 HP, so I was dealing almost half of it’s HP as damage!

You start the game with 4 characters unlocked and you unlock 4 more as you advance. We only tried one of the new ones, as we were quite content with our starting characters and the synergies we found between them. We are looking forward to trying out the other 3 also, as they seem really powerful and we’re curious how it feels playing as them.

The Outcast is a great mechanic that you will unlock after the first fight. Having something to use your extra charges or Aether on feels very good, as we often ended up with not enough Aether to buy something or to focus a Breach, so charging the Outcast was a great option during those times. Besides, we learned that his deck has amazing abilities and we wanted to take advantage of it as much as possible. As the story advances, you unlock more and more cards for his deck and it was really fun to constantly flip new abilities when charging him to the max.

The game also has an Expedition mode that I understood was first added in Aeon’s End: The New Age. This mode allows you to randomize everything in the game using Randomizer cards and build your own expedition. It’s just like playing the game again, but unlocking stuff in a different order while also keeping a score to see how well you did in the end. It’s a great, fun challenge, because although you already know everything there is in the game and how each Nemesis works, you never know what cards you’ll unlock next so you’ll have to adapt yourself to the currently available cards. I’m sure that if you put together multiple games in the series and try Expedition mode, you’ll have lots of fun fighting Nemeses from different games with cards that were not available when you originally fought them!

Aeon’s End: Outcasts quickly became one of the top games in my collection. The storyline, the complex mechanics and the overall quality of the game exceeded my initial expectations! I am now looking forward to try other games in the series, as my hunger for defeating new Nemeses is high!

Designer: Sydney Engelstein, Nick Little, Kevin Riley
Publisher: Indie Boards & Cards
Players: 1-4
Time: 60-90 min
Times played: 8 (counted each battle as a different game)
Full disclosure: A copy of Aeon’s End: Outcasts was provided by the game publisher.
Did you like the review? Follow me on my Instagram page where I post daily photos of games I play and other things. You can also support me on Patreon to gain access to various special content, such as game unboxings, first impressions, polls to decide what games to cover next, and early access to reviews!
Tags:card game review, review 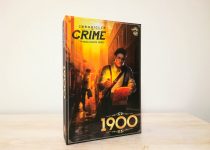